What is the Earth Bill

The Earth Bill, in a nutshell, will: 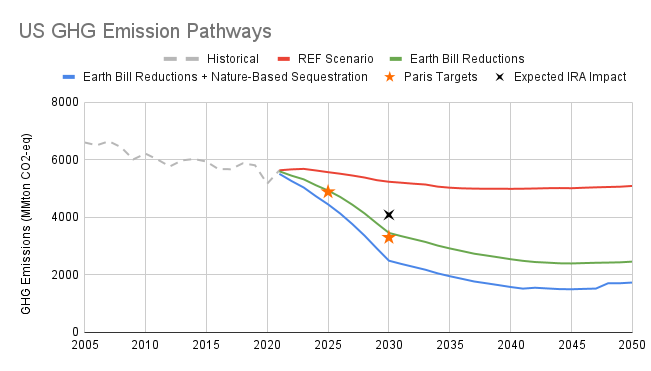 Experts from RegenIntel, previously with Project Drawdown, produced a report on GHG Reductions from the Earth Bill - with tremendous results!

Here are the highlights:

Between 1.5 and 2 degrees, disaster events called TIPPING POINTS ensue like ocean currents that stop flowing and the ice sheets that melt entirely. Tipping points then unleash irreversible domino effects that will "fundamentally disrupt the global climate system" - the foundation of human life.

We also don't know how long it'll take to transition.

To build 100% wind, solar, geothermal, tidal and wave. To upgrade transmission lines and put solar on millions of homes. To have electric car charging stations everywhere. To switch millions of farmland acres to healthy soil practices.

We don't know how fast we can stop our pollution.

So we need to get started with a deadline that matches the clock. And see how we do. If we miss the 2030 goal, we will know then. If we aim for later and miss that, it'll be too little too late. That's a timing gamble we can't afford. Not on this. We're already very late.

Time has run out. We must stop our pollution now. Every nation in the world must take this action. The future will not have these options, and will not be able to undo our damage due to our failure to act when we knew and had time to prevent the worst. Now is that time.

(Check out Climate TRACE for specific sources of GHG emissions). CAN WE DO THIS? EXPERTS SAY YES. IT'S ALREADY HAPPENING - JUST NOT FAST ENOUGH!

The Health Benefits are Major

Why Do We Need to do this? Mandates & Deadlines Ensure Results

The recent climate actions by Congress provide vital seed funding for materials and supply chains, clean infrastructure (like EV charging stations), corporate tax cuts for building clean energy, and consumer incentives for electric cars and appliances - which will all inspire great voluntary action. But they don't stop pollution directly or require a transition by the corporations at the production level - at the source - on a timeline.

Moreover, the projected GHG reductions (7-10% for the Inflation Reduction Act) depend on variables like the economy and uptake by consumers and companies, at their discretion. Regarding the Bipartisan Infrastructure Bill, with various clean infrastructure benefits, there are no emission projections of the GHG impacts from building roads and bridges, using concrete and steel, although there are clean-procurement requirements via Executive Orders in play too.

This is all very important progress (see White House Clean Energy and IRA Guidebook). But it is not a direct plan for a certain transition away from fossil fuels, and it is not enforceable in any way. We need clear and certain laws that require industries to stop polluting. We've run out of time to kick this further down the road for political reasons. We need pollution reduction requirements on a definite timeline, or we're flying blind. It's time for a real plan - in law - so we can honestly tell our children we are fighting to save their future. For the activists fighting today - the Earth BIll is for you to know that we are trying in earnest to win real solutions. Pollution prevention is the best solution. You are our best hope. Please give some of your time for Earth.

This UN Climate Conference is a reminder that the answer is in our hands. And the clock is ticking. We are in the fight of our lives. And we are losing. Greenhouse gas emissions keep growing. Global temperatures keep rising. And our planet is fast approaching tipping points that will make climate chaos irreversible. We are on a highway to climate hell with our foot still on the accelerator.